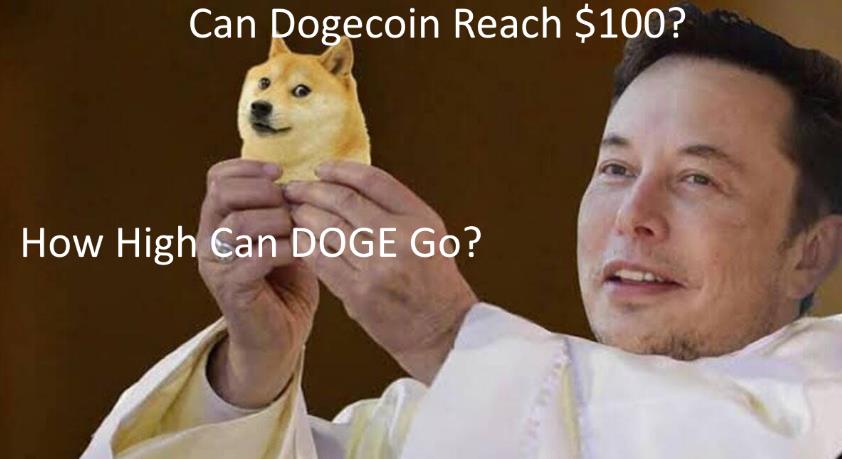 These days, more and more people are looking for options to invest their money. Cryptocurrency is one of the preferred investments, so there are numerous digital assets on the market, like Bitcoin and Dogecoin. That is why it is crucial to know what potential a coin has before you invest your money.

Dogecoin is one of the most popular cryptocurrencies, and many people purchase it. But what they really want to know is “Can Dogecoin reach $100”? In this review, we are going to look closer at this coin and answer that question.

Dogecoin happens to be a cryptocurrency that appeared on the market in 2013. The digital asset was developed to be a friendly introduction to the concept of coin for the general public, and it obtained a fun brand image. The face of the cryptocurrency was the dog Shiba Inu that is famous for the DOGE meme. When this “meme cryptocurrency” appeared, nobody believed that the coin would become valuable one day.

Despite that, the popularity of the digital asset has increased due to the community around it. The thing is that DOGE obtains almost cult-like status on the market. Moreover, well-known people like Elon Musk supported it. The cryptocurrency also contributed to the spread of the awareness of blockchain technology`s value and importance among millions of people around the globe. Therefore, DOGE is one of the most popular digital assets, and they are willing to know will Dogecoin keep rising.

The digital asset was launched in 2013, and its initial cost was 0.0006 dollars. The market capitalization was 3.5 million dollars.

2014 was a tough year for DOGE because new coins appeared on the market. Thus, many people decide to trade them, and the Dogecoin`s price fell to 0.0001 dollars. In 2015, one of the co-founders, Jackson Palmer, decided to quit it. At that moment, many people thought that the cryptocurrency would die, and it did not happen. By the end of that year, DOGE cost 0.00014 dollars.

The coin could not reach 0.0003 dollars until 2017, but consumers still bought it for personal use. Therefore, the capitalization of the digital asset kept growing and surged to 0.0007 by the end of 2017.

In 2018, many digital assets started declining in cost, and the same happened to DOGE. Surprisingly, the coin recovered very quickly and hit 0.017 dollars. In April, the price fell to 0.002 dollars, but it increased again and reached 0.006 dollars by September.

In 2021, Dogecoin grew, so its price was 0.44 dollars by May. That is why people started wondering what expert opinion regarding Dogecoin potential is.

How High Will Dogecoin Go?

As mentioned before, very few people believed that DOGE would succeed, but it has managed to not only survive but to grow significantly as well. There are different factors that can have an impact on the coin`s price, and market sentiment is one of them. For instance, Elon Musk is one of the main admirers of the coin, and it influences the cryptocurrency`s price a lot.

So, how high will Dogecoin go? If the bullish trend of the digital asset continues, then there will be a consolidated trend throughout 2021. Many experts are sure that DOGE has all the chances to finish 2021 with 0.4 dollars. In 2022, the coin may cost 0.35 dollars, but it is expected to rise to 0.52 dollars.

Will Dogecoin Ever Reach a Dollar?

Having analyzed how the coin`s price changed over time and having taken into consideration its popularity, many experts believe that it will reach a dollar. Moreover, they think that the digital asset can reach 0.75 dollars, and over the following five years, it can increase to 0.98 dollars. Consequently, Dogecoin is highly likely that 100 dollars will be the price for Dogecoin in 10 years.

Is Dogecoin a Good Investment?

If you are going to invest in this digital asset for a longer period, then it should be a profitable investment. The reason is that the price is constantly growing, but it increases slowly and gradually. That is why if you are a short-term trader, then you should go for a different coin.

Where Can I Buy Dogecoin?

You should find a trustworthy broker with low fees if you are willing to invest in the digital asset. It can be one of the following options:

These days, traders can access a wide variety of cryptocurrencies because more and more people use them to invest their money. Some of them are worthy, while others are not. DOGE has become one of the leading digital coins, in spite of the opinion that it will not succeed. So, will Dogecoin ever be capped? Experts are sure that the coin has all the chances to keep on growing, and it can even reach 100 dollars price after a few years. Therefore, you should consider this digital asset if you are seeking a long-term investment.